In this tennis article, I will perform a tennis serve video analysis of a young tennis female player. I break down multiple elements of her tennis serve, but I will mainly focus on the trophy position. In fact, this is one key component that all the best servers in the world have in common. It is known as the “trophy position” because it is the position on many trophies that are given at tennis tournaments.

In this tennis serve video, I begin by discussing her starting position, which overall is pretty good. She is relaxed and the tossing arm goes up while the swing arm stays down. She does not perform the dreadful “down together, up together” move that so many traditional coaches teach.

Next, she starts bringing the racquet up, with the first move, to the trophy position.

This is one aspect of her tennis serve that this player could improve. I like to look at when the ball is released where the racquet is, now her racquet is pretty low. Generally, a low take back sometimes makes it harder to get on top of the ball and really crush it.

Trophy Position on The Serve 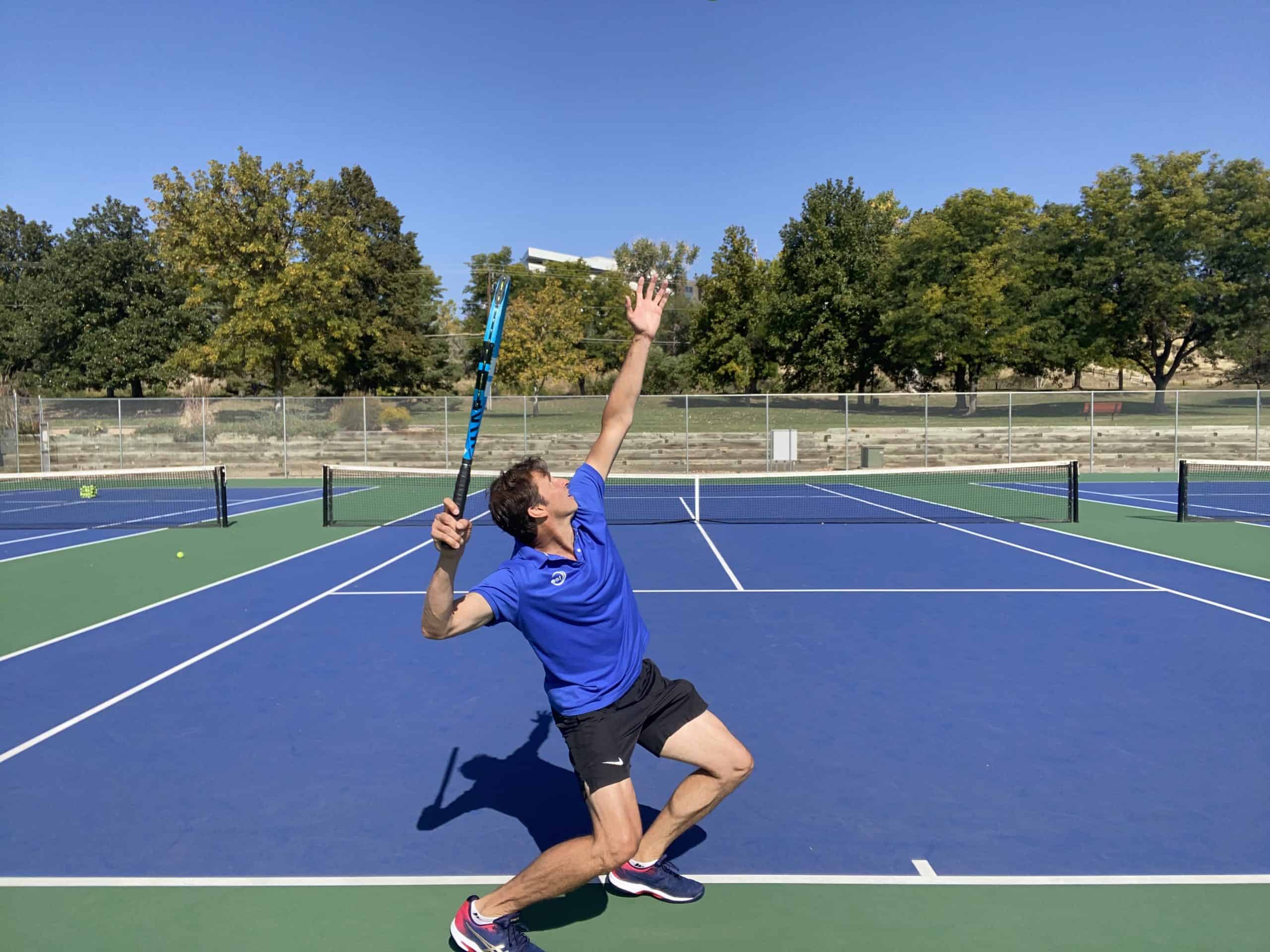 The trophy pose occurs right before a player goes into the racquet drop position and swings up to the ball. Its success depends on how you start the tennis serve and how the first move is initiated. If you want to learn how to effectively fix your trophy position on the serve, check out this tennis article.

Therefore, I would advise her to make the first move drill against the fence. This is a fantastic exercise to develop a solid first move, because it will get the racquet strings facing towards the net. Likewise, it would be better for her to keep the racquet angled down more, and the elbow further past the body.

Another aspect of her tennis serve that I noticed is the curve on the low back. This is a common mistake made by many players, who do not use their core and hips properly. Thus, they tend to squat more than leaning into the court as the knees bend. I highly encourage tennis players to perform corrective exercises off the court to instantly fix this serve mistake.

When I see players in an excessive low back curve, I tell them to push the pelvis forward and “tuck the tail”. This will help get the hips under the body, but it requires consistent practice. The last thing that I would like to point out is the contact point. I suggest making contact with the ball at the highest point, and keeping the head up.

I hope you enjoyed this tennis article on how to find the proper trophy position on your serve. I am fully committed to help you accelerate your tennis results on and off the court, so you can unlock your true tennis potential.

P.S. – Want to take your serve to the next level? Avoid power leaks on your serve with this little known “elbow the enemy” move. ClicK here to get instant access.

You are about to discover…

…the secrets to finally beating the dreaded pusher that has been a thorn in your side for waayyyy toooo long! […] Read More

Forehand Tip I Use The Buggy Whip Against The Slice

Serve and Volley Like a Pro: Tennis Footwork Tip

Today you’re going to discover some serve and volley tips that can make a huge difference for you. There are many aspects to develop when becoming a good serve and volleyer and one of the areas to focus on is getting the proper […]Read More