How To Add More Power On Your Serve

How To Add More Power To Your Serve

What would it take to add more power on your serve?

Well, I’ll give you a complete breakdown of the components that go into getting more power on your serve.

Now, I’ve got to start with the legs first.

The legs are not the issue, they are not going to give you the power on your serve that you need. But I’ll start there because it’s such a common misconception that I hear from other coaches and other players.

I’ve got players that come to me, and I’ve one in my mind in particular. She’s a college player and her coach at that time told her that she needed to use more legs on her serve.

When I saw videos of her serve, I started seeing a player that would bend her knees and almost squat down. She had a curve in the low back, as she was heavily squatting and mainly using her quads to bend down.

That’s not an efficient way to serve. My belief is that if you don’t have the upper body down, it doesn’t matter how much you try to use your legs.

So before we get into the upper body, I just want to mention the legs again. When you bend your knees, that can give you a little bit of power on your serve.

However, if you have a lot of things wrong with your arm and your upper body, it’s not going to matter if you do bend your knees.

Of course, some players don’t jump high enough, and they don’t bend their knees.

But, I do see a lot of players that really bend, and think they’re using their legs. Instead, what you really want to do is shift your hips forward a little bit more.

That will help get your body more aligned. 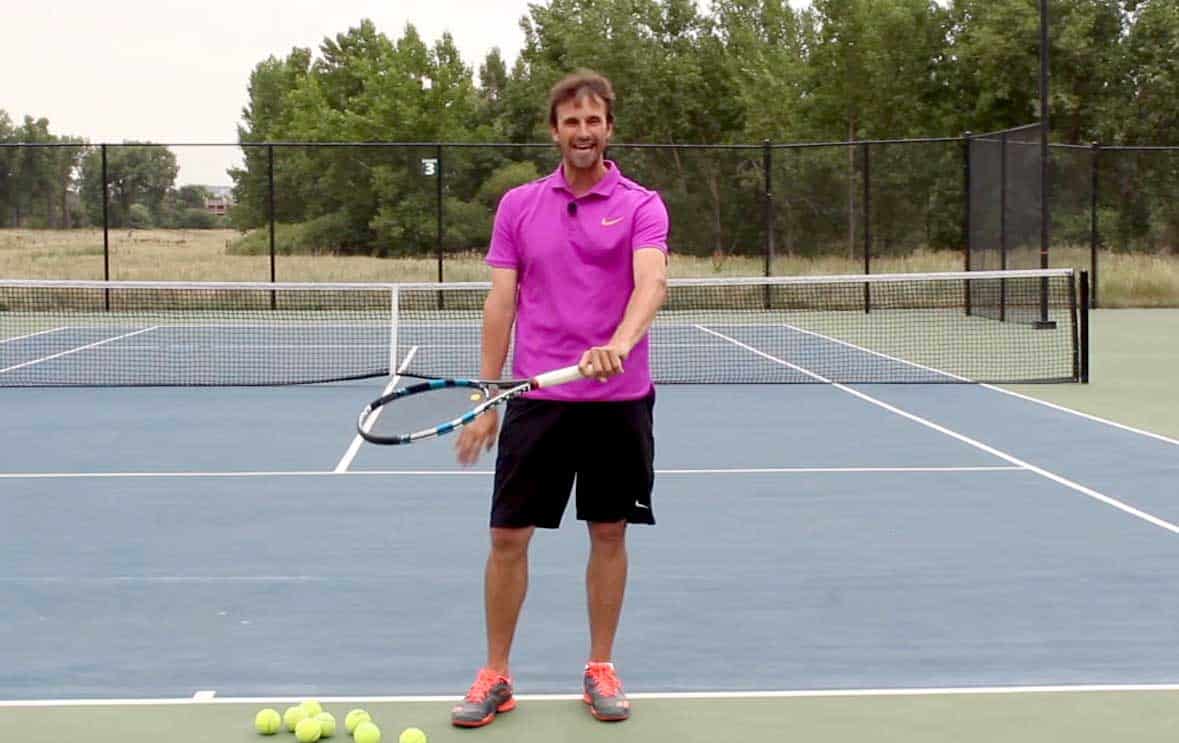 We’ve got to talk about the upper body.

I actually want you to take the legs out of play. Don’t use your legs if you want to develop a powerful serve.

I know that sounds crazy, but I’m here to break down some of those misconceptions, and really get to the heart of the matter when it comes to the serve.

We get that continental grip. I called it a shake hands grip, that’s going to be very important to develop power on your serve.

Too often players are choked up, and that causes them to lose a lot of power on the serve.

I recommend you to spread that index finger and get that trigger finger working so that you can get the hand working.

Also, make sure to hold the racket lower, get the hand angled, and relaxed to avoid having a block grip.

A lot of players don’t even think about it, but these small nuances are critical to get your continental grip.

Now, there’s another little subtle tip that’s going to help you gain more power on your serve, and this is assuming that you have a continental grip.

I want you to move the racket slightly towards the forehand side. Hence, it’s in a weak Continental grip now.

When you go to swing, it’s going to be easier to pronate. Instead of focusing on pronation, you can just swing normally because you’ve made a small shift on your grip. 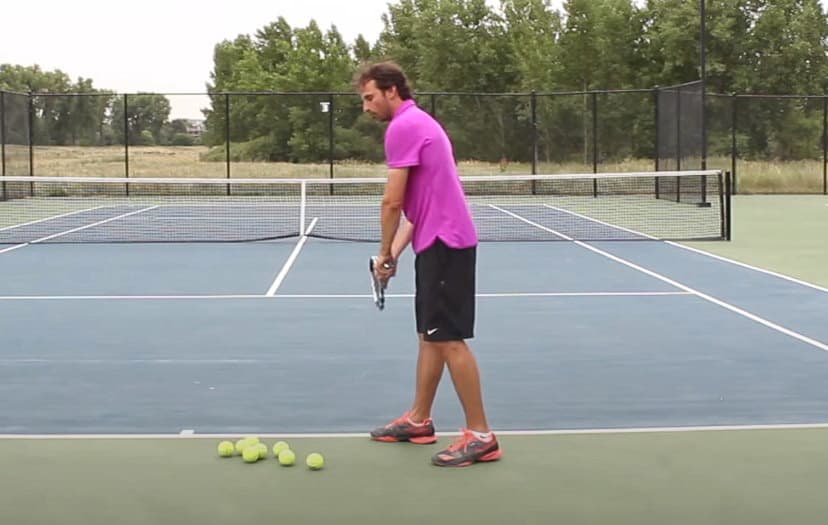 Let’s go over the first move.

There are so many players that move with the arms, and open their racquet face as they start to take the racquet up. One of the keys to developing natural power on the serve is to feel like the shoulders turn first.

You want the hips and the shoulders to move together in the beginning, as you’re bringing the racquet up. For example, picture Roger Federer ; he doesn’t move with the arms first.

The trophy position comes in next.  Get into a throwing motion position and your arm relaxed. Many players have a lot of tension back in their arm, which hinders their ability to get in the right position.

Afterwards, you can focus on the racket drop. I have a great drill to help you fix the racquet drop on the serve. You can just hold the racket super low with the ring finger and the pinky finger off of the grip . Thus, you’ll be able to swing in a relaxed fashion, and notice how the racket just naturally drops.

If you relax your hand, you can actually drop the racket. It’s as simple as that; nevertheless, most players are too tight when they take the racket back and go to swing. You can see that there’s a lot of components that go into creating a powerful tennis serve.

I encourage you to practice your upper body motion, by working on your shoulder turn and arm motion without the legs. Using the legs complicates things because syncing the upper body and the lower body is very difficult for many players.

In summary, focus on the upper body first and don’t worry about the legs. Swing the racket naturally and just let the arm come through. Work on one area at a time, and you’ll be on your way to develop a consistent and powerful tennis serve.

P.S. – Ready to take it to the next level with your tennis? Click here to get a free tennis course inside the Tennis Evolution App. Learn the exact step-by-step system that has transformed the games of thousands. of players worldwide.