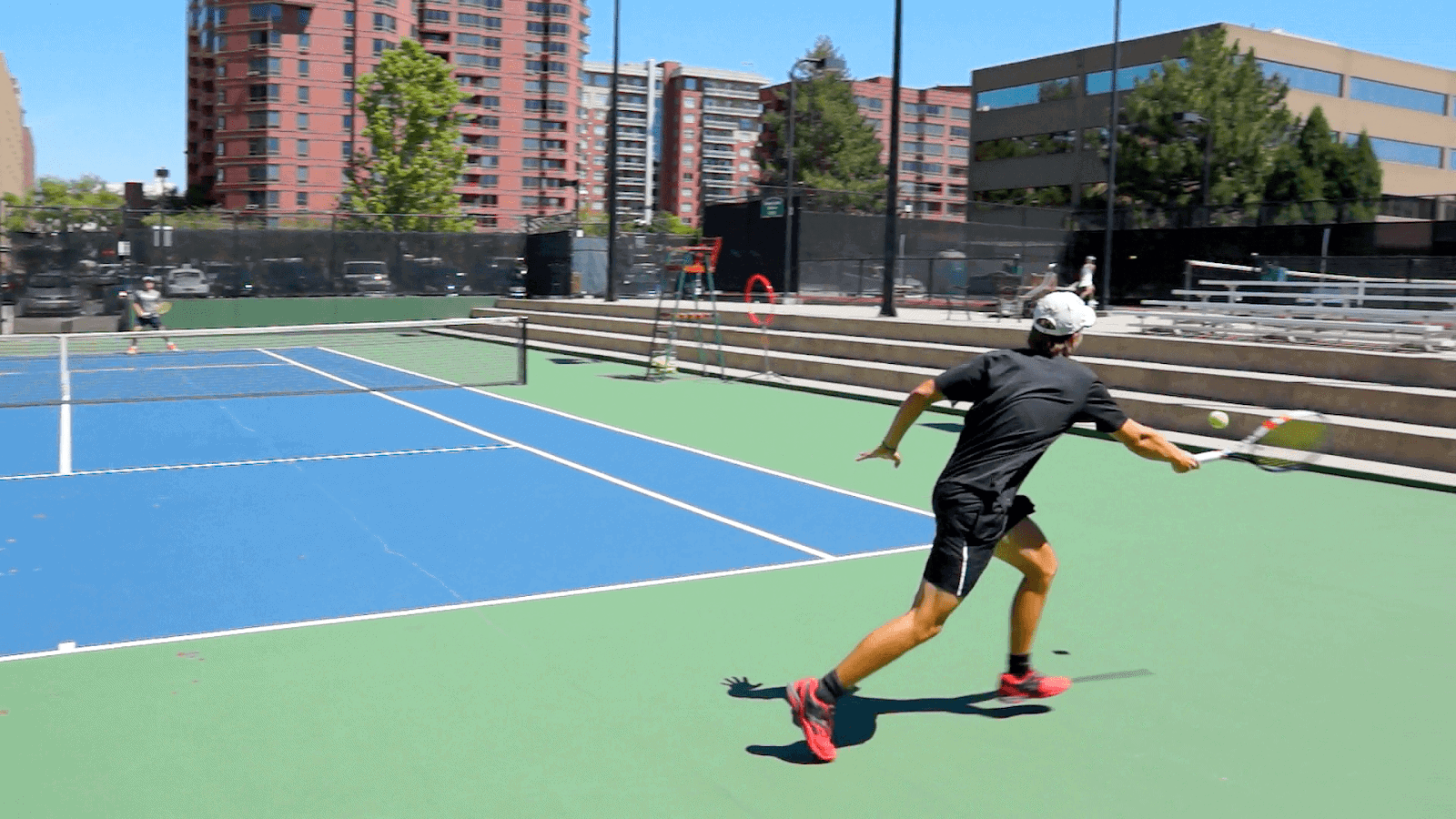 Have you ever wondered to yourself “how can I stop losing to the tennis pusher?”. They are one of the most annoying types of opponents you can play against. Let me ask you something, how many matches have you lost to pushers over the years? Maybe 5, 10, or 20? Have you lost count?

I am sure you feel frustrated because you continue losing to the tennis pusher who does little to nothing. The player who seems to just get the ball back one more time over and over again. The harsh reality is that these types of players exist at all levels. Luckily for you, I have got five amazing tennis tactics that are very effective at dismantling the tennis pusher.

I will describe them in great detail in this tennis article. Consequently, by the time you are done reading, you will know exactly how to beat the pusher. Moreover, you will start to win more tennis matches and have so much more fun on the tennis court.

Are you ready? Let’s dive into these five tennis strategies. 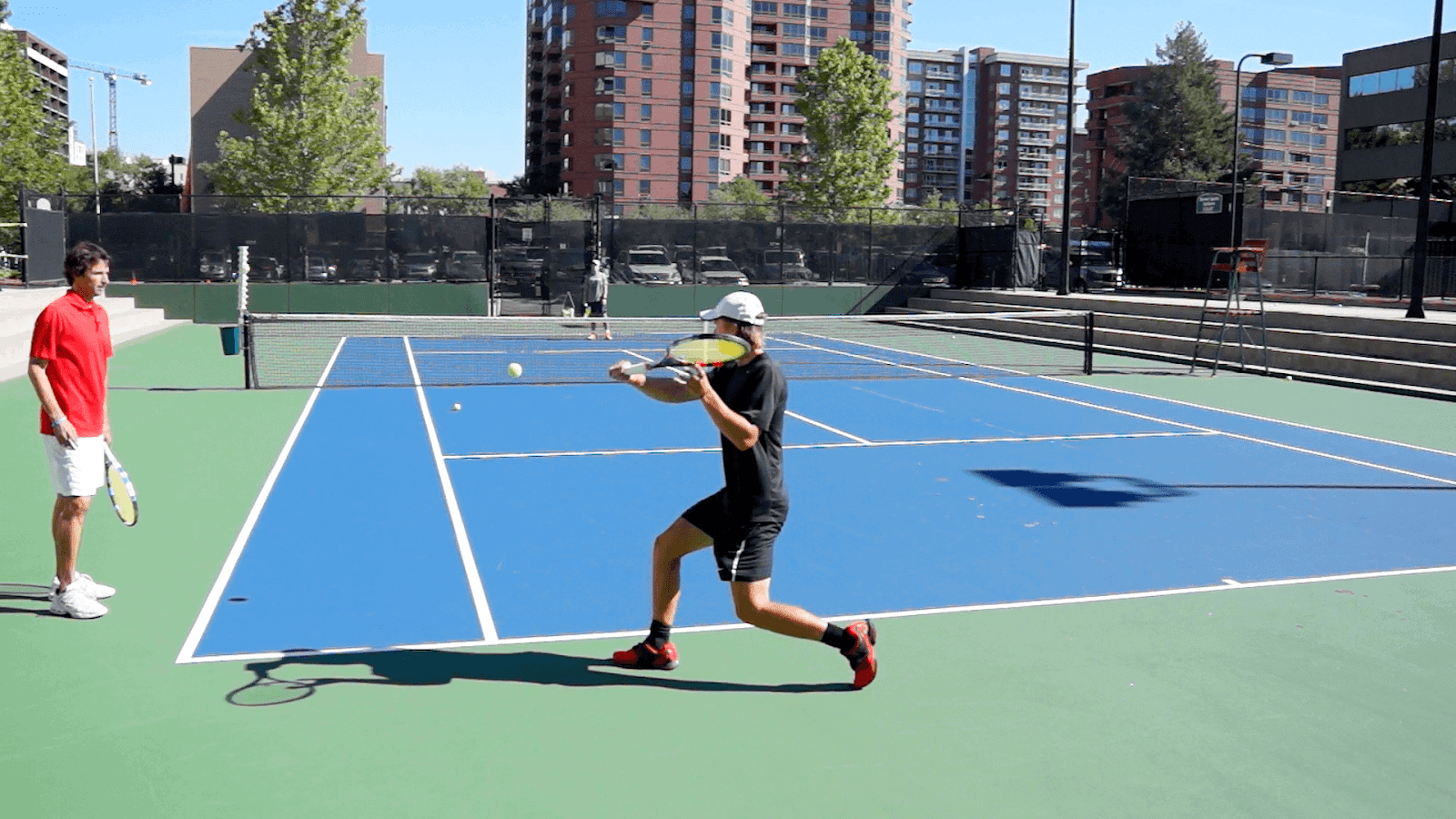 The tennis pusher loves standing way back behind the baseline. It is their happy, comfy place to hang out.

With this deep backcourt positioning, pushers can run down more balls and have more time to get back every shot. They thrive on being able to defend against your offensive shots. However, you can expose them, when they stand way behind the baseline, by using the backhand slice short cross court shot.

You can totally break the tennis pusher down with this little known and sneaky shot. But, let me be clear by stressing to not hit the slice backhand deep crosscourt. Instead, play this shot short and low over the net with a soft touch. Hence, the pusher has to move forward into the court.

The pusher does not like to move from behind the baseline when dealing with a low sliced ball to the backhand side. They simply do not want to be forced to reach for a low ball, nor come to the net. Both scenarios often make them feel very vulnerable, which leads to frustration.

Consequently, the key is getting the pusher to do something different and get them out of their comfort zone. Now, let’s move on into the next tennis tactic on how to beat the pusher in tennis. 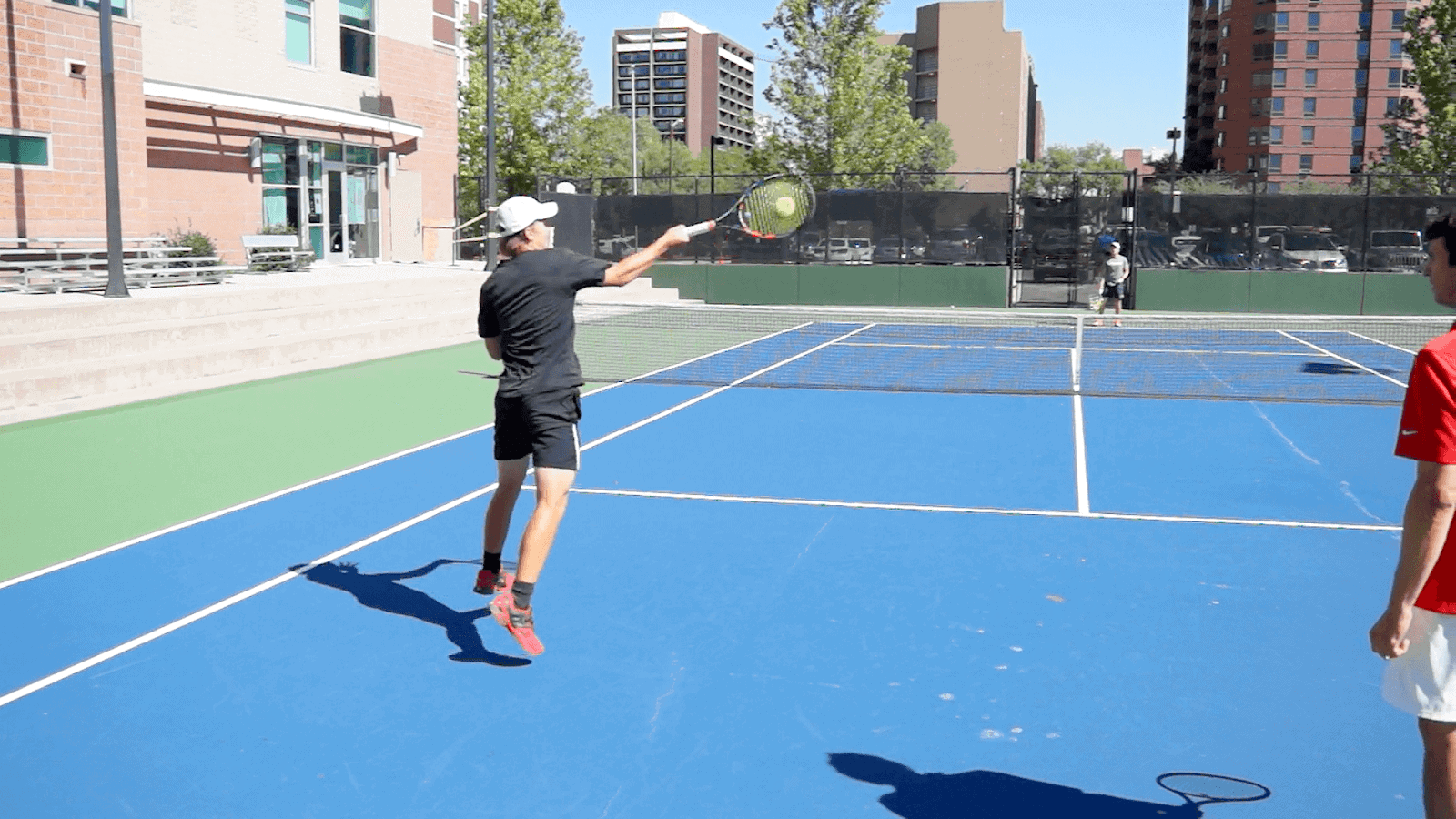 Sometimes the biggest weakness that a tennis pusher has is their second serve. In fact, it might be the shortest ball you get during a point. Thus, if you do not want to get in long rallies, attack their second serve. This will get the pusher in a defensive position and let you take control of the point early.

Many coaches will just tell you to be aggressive and attack, but that is not specific enough. Consequently, it is critical to focus on where you will hit the return by having a specific target in mind.

With this first strike, you never let the pusher get into the point where they can do their damage. Now, what if the tennis pusher is smart and makes an adjustment after you start nailing returns against them? They may move even deeper behind the baseline after the serve. However, you can adjust your return strategy to throw them off.

To execute this tennis strategy, I recommend using the buggy whip forehand finish. This entails going with the racquet above the head and hooking it over the body. Hence, you will get more drive, spin and control on your return.

Use The Drop Shot

When you get a ball that you feel comfortable with, surprise the tennis pusher with a drop shot. Whenever possible, hit the drop shot when you are positioned in the middle of the court since you can add more sidespin to the shot. This will make the ball bounce away from the pusher in case he gets a chance to run it down.

The highest percentage shots will be the backhand down the line drop shot and forehand inside out drop shot. Even if a tennis pusher manages to return it, they will be in trouble at the net. This is because you’ll be able to hit an average passing shot and still win the point. 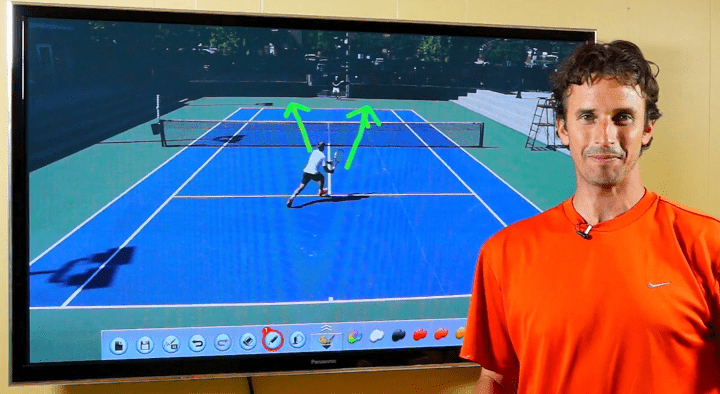 Serving wide and volleying short is a great tennis strategy against the tennis pusher who likes to stand really far back. You can serve down the T, or go out wide, and then approach the net. If your short volley lands right at the service line, the pusher will not be able to get it. This is given that he or she will be standing several feet behind the baseline.

If you can get your volleys to land there and kind of “die” without bouncing too high or sitting up, then not only are you going to win those points, but this will also frustrate the tennis pusher. Thus, this means you will get more free points later on. If you have a good serve, this is a great tennis tactic for winning quick points and beating the tennis pusher.

Open up the court

Pushers are used to running short distances and moving in a straight line, planted behind the baseline. Hitting a short angle that goes off of the singles sideline before it reaches the baseline makes the tennis pusher move diagonally. Even if they return the ball, the court remains fully open for you to end the point.

Your goal is to be patient in a rally until you get a ball that is close to the sidelines. In fact, that is the one which you can use for taking initiative and hitting good, angled shots. The ball you hit should bounce around the service line and go off towards the singles sideline. It is not enough to hit forehand angles, you should be able to do it on the backhand side as well.

If your opponent moves behind the baseline after a weak second serve, you can start hitting devastating topspin angles. Therefore, you can pull them off the court, force them to move wide, and completely unravel them. Moreover, by hitting an aggressive topspin angled shot, you will surprise the tennis pusher who is normally prepared to handle a deep return. 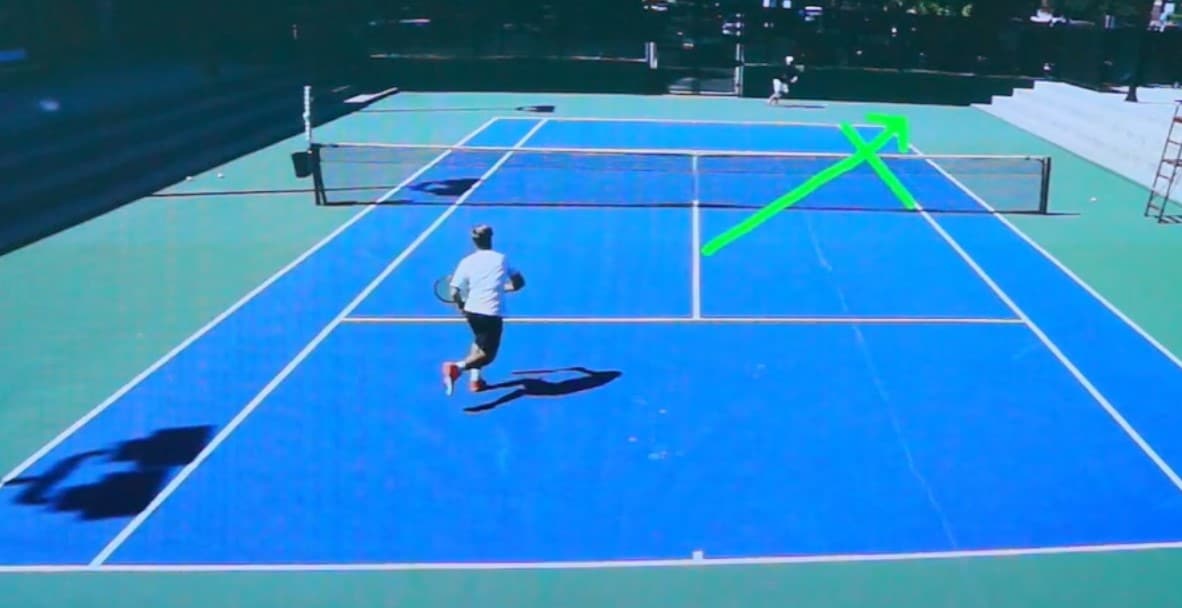 Here is why. If you hit an approach down the line when your opponent is way behind the baseline, they can simply take one or two steps across the court. As a result, they have the choice to hit an easy crosscourt passing shot or a lob over your head. But, if you hit an angle approach shot, you force the tennis pusher to cover more ground.

The pusher has to run further across the court (move up into the court) to deal with your angled shot. This is tricky for the tennis pusher because they might be forced to hit a floating weak slice back to you. Thus, you will be adding that surprise element by angling the approach shot instead of always hitting down the line.

The pusher will be forced into hitting a low percentage passing shot down the line. Perhaps, they will have to hit a defensive ball back through the middle, which you can easily put away. Hitting angled approach shots is the smart and powerful way to disrupt the tennis pusher. That is why it is important to consistently practice your forehand approach shot.

If you put these five tennis tactics into action, you will never have to wonder “how to beat the pusher in tennis” ever again. The key when playing a pusher is to remain calm, have a clear strategy, and to play it safe.

Pushers count on you going for too much and making a mistake. The next step for you is implementing these tennis strategies on the practice court. Consequently, you will transform your singles game and start winning matches more often against this type of opponent.

P.S. – Want to take your serve to the next level? Avoid power leaks on your serve with this little known “elbow the enemy” move. Click here to get instant access.