In today’s video, you are going to get the chance to watch another tennis serve transformation…this time a former top WTA professional has asked me to help her.

It’s an honor to help Vasilisa Bardina take her tennis serve and her game to the next level.  Her career high ranking was #48 in the world at age 19 in 2007.  She played Kim Clijsters at the Australian Open that year and then, injuries derailed her tennis.

Now 23, she wants another crack at playing on the world’s biggest stage.

And I believe she can do it.  Check out what she has done with her serve in just a few days.  The sky is the limit for this gifted athlete.

Let me know what you think of this video.Jeff

Hey everyone, Jeff Salzenstein here.  I have a great video for you today.  Stick around for the entire video because you’re going to learn a ton about the serve today and that’s I know a lot of you guys want to learn about the serve, and really Pete Sampras, Roger Federer, if you haven’t been following my blog already, they are the models.  They have great serves, they have great technique and I believe it’s the easiest way to learn the serve.

So last week, we talked about Javier, his serve’s transformation.  Very very powerful stuff.  Really exciting for me as a coach to see a kid work so hard to make these changes, and Javier is not the only one.  I have countless other students that have shifted their serve, they’ve changed it, they’ve been open and they’ve made the necessary changes with the drills that I give them week end and week out.

In the last couple of weeks, I’ve had the great pleasure to work with a former top WTA Tour Player who’s going to make a comeback.  Her name is Vasilisa Bardina and she was #48 in the world in 2007.  She played Kim Clijsters at the Australian Open first round in 2007.  And in the last couple of years, she’s had a ton of injuries and a bunch of setbacks but she’s ready to come back and she’s hungry and she’s eager.

We met a few weeks ago and I took a look at her serve and that was the first thing I told her.  I said, listen, you got to #48 in the world with a deficient serve.  Yeah, you’re serving between 110 and 120 miles an hour, but as you said, you’ve got pain — this is what she told me — she’s had pain in her shoulder the last 8 years and one of the reasons we believe that’s happened because is because her elbow is really low on her serve.  She uses a pinpoint stance, she has a great shoulder term but that elbow is just too darn low.  And it’s just amazing to see that a player at that level could still have that technical flaw in her serve and she’s willing to change it, which is remarkable because she’s such a great player, she doesn’t need to change it, but she really wants to maximize her serve in her game and she has big dreams and goals.  So we went to work and she got it within 3 days.  I mean actually less than 3 days.  That elbow was up right away, she’s got the coordination and the athleticism to make the necessary changes.  I gave her a couple of drills including the continuous serve drill that I use just about every day and a couple of other positions that I have her hold to understand what it’s like to get in the trophy position.

She really can feel her elbow now.  At first, she couldn’t feel that elbow dropping or if it was staying up, she couldn’t tell the difference and that’s normal, but now she can.  And through some hard work the last week or so, she’s made quite a transformation.

Now, for some of you out there who say, “Oh I can’t do this because she’s a pro.”  Well remember, go back to the last video, look at Javier, a complete beginner on the serve, wrong grip, wrong coordination, wrong everything, he made the change.  So you can do it.

If you’re committed and you’re open and you’re willing to learn and I want to help you.  So come find me, shoot me an email, I’ll do my best to help you out because we’re having tremendous success out here in Denver, Colorado with a lot of different players with their serve, so we’d love to hear from you.

But again, back to Vasilisa, she is an incredible talent.  I believe she’s going to have one of the best serves in the world because she’s modeling it after the top male pros.  And I think that’s one thing that’s missing — actually I know what’s missing on the women’s tour — because I watch a lot of women serve and I do shake my head and I say, wow, they could play a lot better if they could develop their serve and make it look like the best servers  on the men’s side.

So hopefully you enjoyed this video, I really enjoyed making it.  I enjoy working with all my students on the court because I see tremendous games on a daily basis.  I’d love to get your feedback.  Go out and try some of these drills that your’e seeing and some of these concepts and see if you can model the best pros.  It doesn’t matter what your level is, you can do this.

So leave us a comment at the blog, I’d love to hear from you, and we’ll talk soon.  See you at the next video. 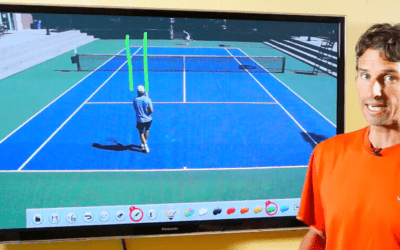 So, you want to know how to play against a big forehand, and win? Well, this article will show you how. Playing against someone who has a big forehand…